Coffee drinkers love their morning cup o' Joe. In fact, according to a 2010 Filterfresh Coffee Report survey, 54 percent of those surveyed said they would give up their cell phone before giving up their daily cup of coffee. And even though 96 percent of respondents report that they receive their daily shot of caffeine from coffee, the majority of coffee drinkers are not looking to black coffee as a meal replacement or weight loss contributor. But can drinking black coffee boost your weight loss efforts?

"Some studies have shown that drinking coffee with caffeine may slightly increase weight loss or in actuality prevent weight gain by suppressing the appetite or the desire to eat," says Kathy Taylor, a registered dietitian. "It may also help with calorie burning by stimulating thermogenesis--our body's way of generating heat from metabolizing food. Ultimately caffeine acts like a diuretic causing us to have water loss so there is a temporary decrease in body weight."
Often people trying to lose weight think that coffee may give them an edge, because after drinking coffee they often feel full and don't eat as much. "Coffee is not a food substitute," says Dr. Danine Fruge, Associate Medical Director of the Pritikin Longevity Center & Spa. "It will only fool your brain for so long. You still need to eat."

Helps with Your Workout

Coffee--and caffeine--is a great weight loss tool for several reasons, according to Maik Wiedenbach, owner of Adlertraining in New York City. "It is a powerful anti-oxidant, which is important for your recovery from exercise and overall immune health. Also, coffee mobilizes free fatty acids, which can then be oxidized during exercises." Wiedenbach adds that coffee gives you a mental edge and greater focus. 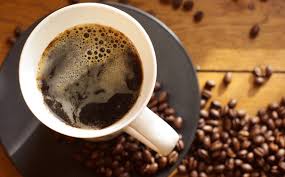 For maximum weight-loss success, the Weight Control Room website suggests drinking coffee black, on an empty stomach and only in moderation. The site says caffeine can increase your metabolism by stimulating your nervous system because it facilitates the burning of body fat by pulling fatty acids out of the fat cells. The site, however, cautions against drinking coffee while consuming carbohydrates. "If you drink coffee while eating carbohydrates the insulin produced in your body may override the fat burning effects of the caffeine."

"Black coffee does get your heart pumping a little faster in the morning before a workout but it is stimulant induced and not natural," adds Taylor. "My advice is to keep your coffee or any caffeinated beverages to only 2 per day"--that's two 8-oz. cups of coffee per day or two 12-oz. caffeinated sodas per day. Taylor advises drinking them before noon so they won't negatively impact your sleep. "The ultimate goal is to get enough sleep (6 to 8 hours/night) so you don't need the stimulant, and that usually means cutting the TV off at a decent hour." Coffee is an anorectic and will suppress your appetite. That's why it's important for coffee drinkers to consume more water and maintain a healthy diet. "When people drink a lot of coffee they sometimes cut back on their water intake and are more prone to snack on unhealthy foods like pastries," says Dr. Fruge. "Sometimes people who drink coffee find themselves overeating later on in the day because they skipped meals while they were drinking coffee," she adds.

Since coffee has a quick saturation effect, Wiedenbach cautions coffee drinkers to not use it every day. "High doses (above 800 mg/daily) can lead to heart palpitations, tremors and sweating," he adds. There's some good news, though. "The body wanes off caffeine quickly; it only takes 5 days to clean the receptor cells. After that, you can enjoy the benefits anew," Weidenbach says.


Source
http://livewell.jillianmichaels.com/black-coffee-weight-loss-4922.html
Posted by Unknown at 08:30:00